The I.P.N. Book, Movie and DVD club is a great and fun way for I.P.N. members (and non members) to access reading or any other book, magazine, movie DVD TV program or other forms of media that has been given the seal of approval by other I.P.N. members across the nation and around the world.

Here’s how it works – upon release of a book, (non-fiction or fiction) DVD or any other media or entertainment project that relates to disasters and emergencies, terrorism, the environment, or other threats to public health and safety, a number of I.P.N. members (and non members) will be randomly selected to read, screen and then, review the material.  A special group of professional film critics will also contribute to the section along with the occasional commentary from the I.P.N. officers, staff and members.

Everyone will be asked to submit their commentary and, it will be posted on the site with a special IPN rating system.

Six is excellent and …

seven is a must read, see or listen.

Only the best will be considered for posting on the I.P.N. club.

The professional critics will have a special section called “critics corner” that will include a brief audio or video clip with their commentary.

This Month’s Book Club Selection is: 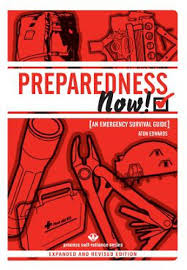 Process’ Self-Reliance Series guidebooks provide tools for self-sufficiency and personal protection at a time when extreme weather, terrorist attacks, and economic uncertainty have become the new realities of twenty-first-century life.

Volume 1 in the series is PREPAREDNESS NOW! by Aton Edwards, Executive Director of the NYC-based non-profit organization, International Preparedness Network (IPN). IPN has worked with the Red Cross, Center for Disease Control, New York City Police Department, and other organizations to train thousands domestically and overseas to prevent and respond to emergencies and disasters.
PREPAREDNESS NOW! provides information and techniques that can help mitigate the destructive effects of disasters, whatever the cause. With illustrations, photographs and step-by-step instructions, this manual delivers practical advice on:

Aton Edwards has been featured on many national and international television and radio programs. Edwards and I.P.N. are currently involved with assisting reconstruction of small towns in Katrina-deluged Mississippi.

This months commentary for Preparedness NOW! as of:

“ Of course I am biased, but I believe it is a great easy to read reference guide for everything you learn need to know about preparedness.  It is very informative and has lots of useful information.  The only thing I don’t like is the Black Mr. Clean picture of Aton on the back cover.  I give it six Dangershields for that.”

“ I like it.  It is really easy to read and understand.  Even all the depressing “end-of-the-world-as-we know it” stuff at the beginning is well done without the usual preachy tone.  His matter-of-fact approach worked well for me.  Best book of this type I have ever seen.  I give it a seven.”

“This is so well done.  It has so much information it must have taken a long time to get this together. Definitely a seven!”

“ I don’t usually read these types of books but this one was good.  It had lots of information I didn’t know about and I liked the style.”

5. Paul James, Security Specialist for a layperson, this is a survival bible. You can’t beat that and this is coming from someone who doesn’t like s&$t. I carry it with me at all times. Seven stars!

6. Marion Hilliard, Lawyer I didn’t think things were actually this bad until I read the first chapters. Now I made it my business to memorize all the important personal protection stuff. Very very useful, well written too. I give it a six!

I believe that the 11th hour is one of the most important films that I have chance to see in many years. I believe that everyone who hears about it should make it their business to see it! Seven strong stars!

If you thought that the Day After Tomorrow was scary, wait until you see the 11th Hour! I give it six stars!

Preparedness NOW! An Emergency Survival Guide for Civilians and their Families