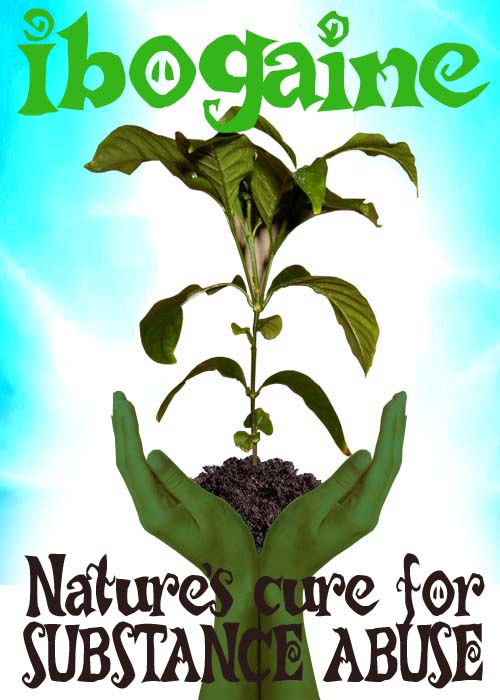 Let me begin by wishing you all a Happy New Year.  There are many difficult challenges ahead and I hope you can meet them safe, healthy and of course … prepared.

In 2015, the I.P.N. is committed to presenting the most revolutionary and cutting edge disaster preparedness/response/self-reliance/sustainable living concepts and ideas that cover the broadest spectrum in each discipline.  The following story features one of the most incredible!

Over two decades ago, my friend Dana Beal, one of the original Yippie! activists introduced me to Ibogaine, an amazing alkaloid drawn from  Tabernathe Iboga, a plant found in the African rainforest. When Ibogaine is taken in a medicinal form in small doses, it can arrest the craving for a broad spectrum of drugs including,

heroin, cocaine, nicotine, alcohol and a number of other frequently abused substances that many find impossible to break away from.

It’s anti-addictive properties were accidentally discovered by Howard Lotsof  back in the early 60’s, when he was experimenting with drugs and developed a heroin habit that he couldn’t kick.  While searching for a new high, a chemist friend who also frequently “turned on” with psychedelics offered him a mysterious white powder, that he proclaimed would induce a “thirty-six hour trip.”  He was curious and tried it, not knowing that the bitter tasting powder was once used by the US government’s MK-ULTRA (Project Bluebird) mind control program on groups of black ex-opiate addicts.

The experiment was conducted by Dr. Harris Isbell at the Federal Narcotics Hospital Of Lexington

Kentucky (of course — the CIA doesn’t confirm or deny that they did this)  Almost immediately after taking Ibogaine, Lotsof lost his craving for heroin.  He even felt emotionally transformed and invigorated.  He began to search for more and for subjects to test it on, informally creating the first Ibogaine trials.  Over the years, Lotsof conducted extensive scientific research into Ibogaine and, was awarded a patent for narcotic addiction in 1985 and poly-drug dependency in 1992.

On December 12, 1980, Beal teamed up with Lotsof to help inform the world about the curative and healing aspects of Ibogaine and to develop a program to help treat addicts around the world.  Howard Lotsof died of liver cancer in 2010, but Dana has been relentless in his quest to make Ibogaine treatments available to all who need them.

A few years ago, I began to consider the possibilities of Ibogaine being used as an emergency treatment for hardcore opiate/cocaine/crack addicts and alcoholics before and — after large scale disasters — when methadone’s availability is sparse or non-existent and other addiction treatments aren’t readily available.   The stress produced by large disasters of any type can also provoke former substance abusers to relapse.   It’s a major problem that is almost never discussed in the context of disaster preparedness, response and recovery.  I knew that it needed to be — so, I began to explore many different types of available therapeutic options but, in the end, nothing even came close to Ibogaine.

In the fall of 2014, I had a telephone conversation with another friend, Dimitri Mobengo Mugianis, a drug policy activist who shared some of his ideas about the subject with me.  He had extensive experience with Ibogaine as he was once a substance abuser with a habit that it helped him kick.  His experience with Ibogaine was so profound that not only did it break his cycle of abuse, he was inspired by, or perhaps compelled to learn more about it and traveled to Gabon, an African nation where Ibogaine is used in a religion called Bwiti and where he eventually became a Bwiti healer — called an “N’ganga.

Mobengo was extremely concerned that this ignored segment of our nation’s population will be shattered when a large-scale disaster strikes leaving an already compromised community completely devastated.  He was right.  It would be an absolute catastrophe and we both knew that something must be done to immediately deal with this looming crisis.   We agreed to work together to develop some practical concepts that could help to significantly diminish this threat.   Right after we ended our conversation, I knew that Ibogaine would be at the top of our list of ideas.

The problem is, we also knew that it isn’t legal to use in the USA.   Canada, Mexico, Norway, the UK  and several other countries allow it, but that doesn’t help Americans with drug habits. Legalization is the only way it can be used as a widespread therapy in the U.S.  That process begins with an FDA trial.

Once it receives their approval, Ibogaine could be made available for all who need it.  Given the rapidly escalating heroin crisis in the USA, and the looming prospect of a large scale disaster, we can’t afford to wait for another addiction treatment method when the best one is already available.

I believe that it is time to rally support for an FDA trial, and a major push toward legalizing Ibogaine’s use in the USA.

Ibogaine isn’t a magic bullet and it must be used properly by professionals.  When it is, this amazing gift from Mother Nature combined with human ingenuity can not only cure addicts of their life shattering habits but also emotionally transform them in a highly positive way.  It even shows promise for treating patients with Parkinson’s disease and other ailments.

It is definitely a cause worth fighting for as the benefits to all who are treated with it will be evident not only in their lives but for their families, communities and ultimately our entire nation.

To help support this cause, I joined Beal, along with other Ibogaine proponents from across the nation including the popular hip-hop artist Immortal Technique on the steps of NY City Hall to inform Mayor DeBlasio and the NY City Council about Ibogaine and, to also enlist their aid in conducting a safety trial at a NYC area hospital.

We’re still working to gain the support of the Mayor’s office and the NY City Council but have recently assembled a dedicated team of health professionals that are helping us to secure a location where the trials can be conducted.   In November, we staged a benefit at Carolines Comedy Club featuring Immortal Technique, the legendary performance artist Penny Arcade and — yours truly to raise funds for the effort.

In addition, it was also created to help fund an Ibogaine project in Afghanistan that Beal created to help combat the growing opiate problem that has produced nearly 2 million addicts in a nation of 30 million people.

Comparatively speaking, could you imagine America with nearly 20 million heroin addicts? This is what Afghanistan is facing and Beal, along with former Afghani policy maker Murtaza Majeed, and others are working to combat this scourge by opening Ibogaine clinics at the center of the storm in Kabul, the nation’s capitol.  Murtaza and Beal are committed to help turn the tide of this wave of misery that is rapidly spreading across the country and both believe that Ibogaine is the best and most effective way to accomplish this.  Beal also believes that Afghanistan will serve as proof of Ibogaine’s potential for the USA.

I’m already aware of what Ibogaine can do and hope that in 2015, we can assemble the support that Dana Beal, Murtaza Majeed, Dimitri Mobengo Mugainis, and everyone who has   been involved in the struggle needs to make this amazing gift from nature available to everyone.  I plan to continue my work to make this happen and I hope that you will join our efforts!