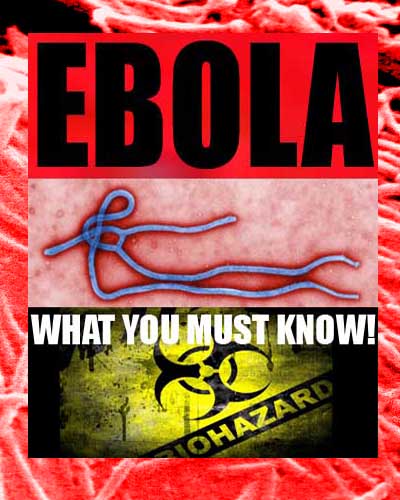 Howdy folks,  I feel that it’s time to speak with you about a major situation that I know you’ve been hearing quite a bit about over the past few days –

The Ebola virus outbreak in Africa.

As it stands right now,  it shows no signs of slowing down and the heath care infrastructures assigned to contain it are completely overwhelmed.  With these conditions it is safe to assume that that the situation will worsen before it improves and the body count – close to 1000 on August 6th – will continue to rise – as will the number of infected individuals.

It’s also reasonable to assume that some of the people living in the hardest hit areas will do whatever they can to  get as far away from the “hot zones” as possible.   Many will cross borders into neighboring countries.   Others with the resources to do it will leave the continent altogether and head for Europe or the USA.

I’m sure a few already have.

At this point, I’d say that the probability is high that Ebola will be moving out of Africa  onto other locations around the world.

We’ve got a major situation on our hands that can rapidly grow beyond our ability to control it.

Laurie Garrett, Senior Global Health Fellow for the Council Of Foreign Relations and author of the Coming Plague recently stated that the outbreak is officially “out of control,” that we are in a perfect storm and, that there is no strategic plan for how this epidemic will be brought under control.

The WHO (World Health Organization) is currently holding special meetings to determine if the African outbreak is an international threat.  Holding meetings is about all the WHO can do as it is too financially strapped to provide any real assistance.  Médecins Sans Frontières (Doctors Without Borders) a volunteer organization has over 500 doctors and other health care experts working in the hot zones – but they are strained well beyond their limits.

We’ve reached a tipping point of a potentially catastrophic situation and the public is in need of accurate information  that they can use to  allay fears, separate fact from fiction, and, also the wild conspiracy theories that are currently sprouting up everywhere on the internet.

So – I’ve decided to write the following  “what you must know” piece about Ebola that you can use to inform and, if necessary (hopefully not) protect yourself if there is an outbreak in the US.  It’s not likely,  but in today’s world, anything is possible, and it is better to be safe than sorry.

Let’s begin with the obvious.

2. How is it spread and what are the symptoms? It’s spread through direct contact with a person who is infected with it and manifesting symptoms.  By direct I mean you’d need to be exposed to either their sweat, blood, urine, feces, mucus, saliva – or semen to get it.  It’s important to note that although the CDC , WHO  and other similar entities and virologists say that it is not transmittable by air (pneumonic) like a respiratory disease, you must also recognize that they are speaking conservatively.

For example, if you found yourself sitting next to someone infected with the disease who sneezed in your direction, or perhaps touched you with a sweaty hand, you could contract the illness.

If you are infected with Ebola it can take from two to three days or up to three weeks to manifest symptoms. 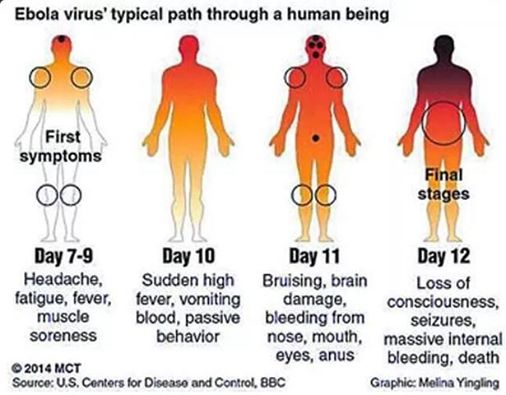 Ever heard of a FOMITE?  if you aren’t a MD, Nurse or other medical professional, you probably haven’t. 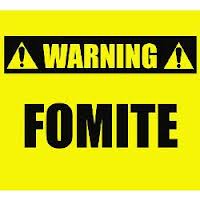 Basically a fomite is a an object or surface where the virus could be deposited and transferred.  It could be a escalator railing, subway pole, elevator button or doorknob.  Could even be a necktie.  Anything the virus can hitch a ride and hang out on will do.   If someone who is manifesting symptoms comes in contact with a surface you touch — and — they leave a little “deposit” of their bodily fluids – you run the risk of contracting the disease if you touch it.  There isn’t lots of data available about how long Ebola can survive outside of a host,  but even if it was only 24 hours, in a high traffic area, that would be very bad.  Especially in large cities where the population is dense and fomites are everywhere.

3. Can it be stopped from spreading?  Yes it can.   Anyone who manifests symptoms  must be isolated and tested.  In addition, everyone that they have come in contact with when they first fell ill must also be quarantined.   If you KNOW that you may have been exposed to someone with Ebola, you need to closely monitor your temperature during the Ebola incubation phase – about three times a day for 21 days to be safe.  If you manifest symptoms, don’t travel – call  911 and inform the dispatcher you may have Ebola.

4. Can it be treated? Outside of standard medical care that treats the severe illness that a hemorrhagic virus produces, there is currently no “magic bullet” drug or therapy that can treat Ebola.   There is an experimental drug called Zmapp made from tobacco plants and monoclonal antibodies taken from mice exposed to the virus that shows some promise.   The two US citizens Nancy Writebol and Dr.Kent Brantley who received the first dose administered to humans are recovering but the verdict is still out on the drugs safety.

5. What is going on in Africa?  First of all, this crisis didn’t start yesterday. It’s been about 5 1/2 months since the first death appeared  in Guinea and spread to Sierra Leone, Liberia, Nigeria,  and almost certainly other areas in Africa. It’s spreading rapidly due to a number of factors – poverty, lack of adequate health care, ignorance of the people about how the disease can be contracted, poor governance, bad information, etc.

As I mentioned at the beginning of this piece,  the countries that have been hit the hardest are completely overwhelmed by the outbreak.   They are nowhere near containing it as they don’t have the resources.  Many of the healthcare professionals don’t even have personal protective equipment (PPE’s) such as gloves, masks.  It is truly a grave situation that will continue to worsen unless the resources to help contain it are immediately shipped to the areas.

The World Bank has pledged to donate $200 million dollars.

It will help, but the funds won’t arrive in time to purchase the PPE’s and other materials needed  to stop the disease from spreading further.

6.  Is this some sort of deliberate attack?  In a word … no.   This outbreak is the result of poor resources combined with distrust of the local and foreign health care professionals, burial rituals that expose people to the contagion etc.  There are actually militarized versions of Ebola, and even its ugly cousin Marburg but believe me, this isn’t one of those.  So you can turn down your conspiracy theory meters. Save ’em for the real thing.

7. How bad can this get? So far it’s killed nearly 1000 and is spreading like wildfire.   If it isn’t contained and controlled soon, the possibility exists for it to become much worse – especially if it mutates into a new strain as viruses tend do everything they can do to survive … including change into something more resilient.   It also depends on just how fast it can spread. One way to measure this is to determine its basic reproduction rate or “r naught” (Ro) factor

“an r naught (R0) is basically the average number of people that one sick person infected with a disease will spread it to other people while the disease is still communicable.

The higher the value of the r naught factor, the harder it is to contain.

The Ro factor hasn’t yet been calculated for this outbreak but it’s estimated that it’s high – but not as nearly as high as measles — because it isn’t pneumonic.   Yet.   If Ebola mutates into something airborne, better start making your peace with the universe because it will spread like a fire in a gasoline rainstorm  and in about a month or less, it would be everywhere.  The only people standing after that would be the ones with natural immunity or resistance.

8.  How Do I Protect Myself From Ebola?  It’s not pneumonic … yet, so it’s easy to guard yourself.  You can’t get it unless you come into direct contact with an infected persons bodily secretions.  If you know someone who has it – if you don’t have personal protective equipment, keep a safe distance away.  Don’t touch their bedsheets, clothing or anything else that may have their bodily fluids on it.   In the meantime … wash your hands with regular soap – don’t use antibacterial as it can dry out the skin.  Keep your skin moisturized to prevent it from cracking.  Little microscopic tears in the skin provide the virus with a pathway to enter your body.

9. Should you be worried?  No, not worried but definitely concerned.  Without a major mutation in the disease that makes it more communicable, even if it does reach the US or any of the industrialized nations, they will be able to contain and control it.

What I do believe you should all be doing is  …

learn from this situation and realize that it is your wake-up call.

Sooner or later we will experience a pandemic.

Something at least as big as the 1918 Spanish Flu that killed 675,000 Americans & maybe up to 50 million world wide. Adjusted to our population today, that would kill 3-5 million Americans -150 million worldwide.  –

Or, we could possibly experience something on the scale of the Black Death from 1346-53 that killed up to 50% of the European population and about 1/6 of the world.   Whatever it is, the time is now to take the precautionary measures that will help you to survive a pandemic.

Stock up on food – the more you have the better off you are.  Having the ability to hunker down is one of the most important survival tasks during a pandemic.

Stay informed – make certain to have a battery free hand crank/solar radio that you can use to constantly monitor the news reports.

Stock up on materials and supplies – make sure to have all that you need to survive a protracted emergency.

There you go Good luck to you and I hope this info helps.